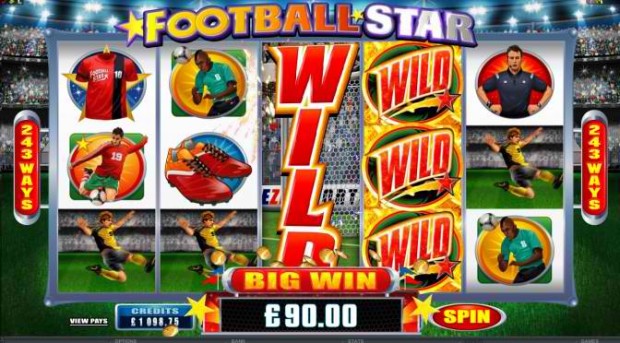 There is no doubt during the Euro 2016 there will be new online slots to celebrate the occasion. Here are some reviews on a few of the best existing football  online slots.

Football Star is first in the series of sports-themed slot games released by Microgaming. This video slot has the popular 243 ways to win format with the high paying symbols representing footballers in action. The Referee, Stadium, Jersey and Boots are low paying symbols, with the Football Star logo, appearing stacked on reels 3, 4, 5, as the wild symbol. There is a randomly awarded Striking Wilds feature where one of the reels can turn completely wild. Once the line payouts are awarded, the symbols in the winning combinations are replaced by new symbols and should new winning combinations are formed the process will repeat.  The football awards scatter payouts and will also trigger the free games feature. It is possible to be awarded up to 25 free games with the trademark Microgaming Rolling Reels feature.

One element in football events are the Fans and Playtech has dedicated one football-themed slot games for them entitled Football Fans. It has an interactive feature where the player can select a country and the playing card icons are shown in the colors of that country’s flag. The wild symbol is the football, which awards the highest line payout. The male and female football fans are high paying symbols. Other symbols, keeping with the game’s theme, include air horn, beer, and top hat. The Football Fans logo awards scatter payouts, triggering the Penalty Kicks free games bonus, where ten free games are awarded and in each free game, up to three wild symbols are added randomly.

From Realtime Gaming comes Football Frenzy offering 50 fixed paylines. Football Frenzy has thematic symbols like Football, Goalie, Referee, Spectator, Trophy, Whistle, Boots and Beer. It is a low variance video slot game that allows two modes of play. The Lucky mode randomly triggers the bonus feature, awarding eight free games. The Striker mode triggers between 8-100 free games when three or more scatter symbols land on the reels. During the free games, the Penalty Kick bonus may be randomly awarded, which has a feature where it is possible to win random bonus credits. On reels one and five is the Striker, a stacked wild card symbol that doubles payouts. The Stadium awards scatter payouts.