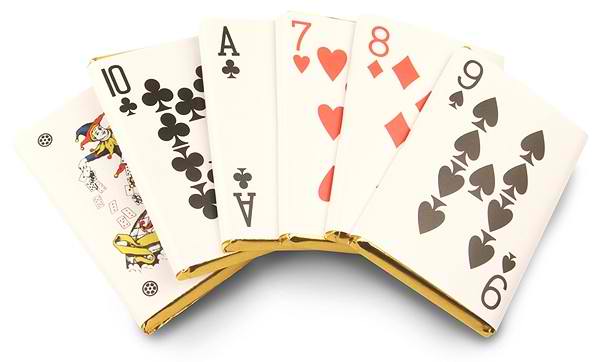 The Origins of Playing Cards

While some players have a fairly good idea of the history of some of the most popular casino games like roulette and craps, only a very few have an idea about how playing cards began. Even other card games like baccarat and blackjack are also relatively known by some gamblers. The origins of playing cards, though, is an entirely different matter. Most of it is lost in time and seldom will people take time to know just how it started and evolved.

The confusion starts from the country of origin. Evidence shows, however, that China is the birthplace of playing cards and the Silk Road was the primary reason why playing cards spread to other countries along the route. The earliest versions of the Chinese playing cards have several similarities with the features of today’s models, which are made more than 8 centuries later. Locations along the route developed their own playing cards according to what they deem to be the perfect for their preferences. India displayed a version that had more than the usual four suits and used a different kind of shape than most other models.

Egypt started the evolution of playing cards during the reign of the Mamluk Sultanate. The Mameluke Deck used four suits making up all 52 cards. Interestingly, the suits were made of coins, cups, swords, and sticks while no Queen can be found in the royalty. Royalty cards featured the King, Viceroy, and Deputy.

The use of four suits gained ground and later became the standard practice when making playing cards, regardless of the symbol, shape, or material. It was not until the 15th century in France that the current symbols of hearts, diamonds, spades, and clubs came into existence. It is not very clear how playing cards traveled from Egypt to Europe, but it can be assumed that trade and travel along endless roads made playing cards almost a necessity to while time away.

It took some time before the French version of playing cards were accepted by the English. Once it happened, the French interpretation became the standard model of playing cards across Europe and even beyond. Except for the French who used a Queen, the court cards were largely composed of male figures, including the King, Knight, and Knave. The Queen’s presence in the royalty cards arrived much later when female authority; even in a deck of cards was no longer such a huge issue.

The rather laid back treatment of playing cards in the masses is the exact opposite during its introduction to mainland Europe. It was something the Catholic Church’s hierarchy considered extremely evil and was to be avoided by all means necessary. Obviously, the efforts were not that successful as the popularity of playing cards continued to grow.

The other prominent changes were made to make the game fair for everyone. Two such additions in the evolution of playing cards is the appearance of indices at the four corners and the reversible design. These are added to keep players from recognizing the cards without even directly looking at the entire card. Cheating, even then, was an issue that could be brutal for the one caught red-handed. Thus, measures have to be taken to avoid blood from being spilled or honor from being tainted.

America manages to somehow influence things in oftentimes very interesting fashion. The Joker started to appear in 1870 and has been a fixture ever since.