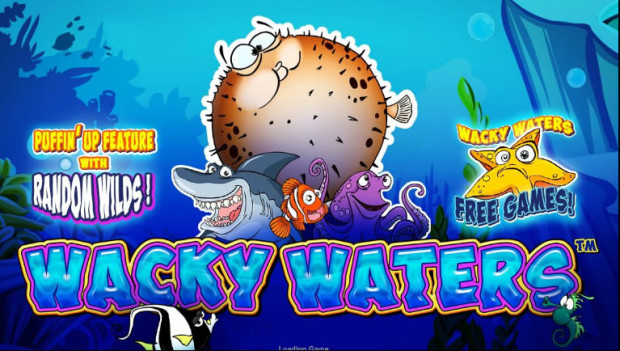 Playtech, a world leading software provider, just released a new online slot machine game and this game can be played on either Omni Casino or Casino Tropez. The game is titled Wacky Waters and as the title stated, this game has a comic-like theme under the water.

The game has a 5×3 reel platform and has an under the water background. The game music background plays a jolly tune while wave sounds and bubbles popping blends with it. The wild symbol in the game would be Albert the blowfish and this symbol awards players the top line payouts. In addition to getting the wild symbol, getting five (5) of the symbols in any of the active pay lines will guarantee a 3,000x on the pay line. The game also includes other payouts in the symbols of sea creatures in all sizes such as the shark, starfish, octopus, fishes, lobster and seahorse. The hermit crab and anchor symbol will provide bonus triggers. All of the symbols will be in a comic style with cute animations.

Every time a player opens up the game, Albert will always land on the center row of the reel 3. The animation of the blowfish will involve it to puff up until the cartoon will be ready to blow up and as the blowfish deflates, it will add six more symbols on the reels randomly. The feature is available in all the base games and during free spin rounds. The Cash Crab feature can be unlocked by triggering three or more crab symbols that will appear on the reels. Playtech designed the crab feature in a way that it will bring bigger payouts. In any case that the player will acquire 3 symbols, it will trigger the award of 1 pick, four symbols will award 2 picks and five symbols will award 3 picks. The picks will be additional win credits for each round. If by chance a player can unlock the crab from the shell, it will award the player 100 times the wager.

The greatest feature in the game is the combination of bonuses a player can achieve from the bonus game and free spin rounds. This round can trigger by acquiring the anchor symbol. This involves helping Albert the blowfish escape the anchor while maneuvering around and snatching multipliers, free spins and wildcards along the way. In any case that any of the additional wilds lands on the 3 reels, this will award the player 3 more free spins and acquire the anchor symbol will also reward 8 more free spins. The top line wager for Wacky Waters is $75 thus making it very attractive for high rollers.