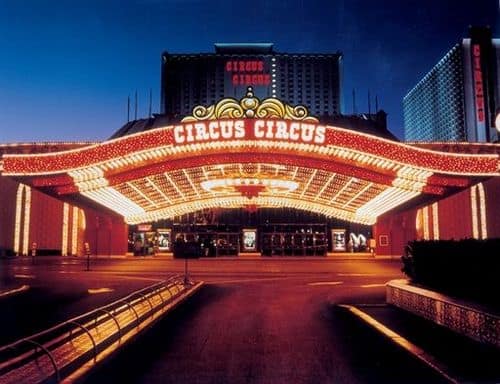 Opened in 1968, Circus Circus Hotel and Casino is one of the oldest remaining properties on the Las Vegas Strip and the largest permanent circus in the world. The complex includes five motor lodges and three hotel towers, an RV park, four casinos, and the Adventuredome Theme Park.

Circus Circus has 3,770 deluxe guestrooms in the Manor and three towers. The Manor consists of five 3-story motor lodges with 810 guestrooms. Manor rooms are the least expensive and most spartanly furnished. The 29-story Skyrise Tower has its own casino and the resort’s two swimming pools. The 35-story West Tower is where the hotel lobby and a shopping promenade are located. The 15-story Casino Tower is adjacent to the main casino, the circus arena, midway, and restaurants. Tower guestrooms are nice for the price and are comparable to other three-star hotels.

Circus Circus boasts 100,000 square feet of gaming in four casinos: Main, West, Skyrise, and Slots A Fun. Video games include over 2,000 slot and video poker machines, 80 table games, and 10 poker tables in the Las Vegas Poker Room. The Race and Sports Book offers 32 HD TVs that range in size from 52” to 103”.

Dining Under the Big Top

Opened in 1982, THE Steak House at Circus Circus is one of the oldest in town and was once voted Best in Las Vegas for 20 consecutive years. Despite a recent plethora of new steakhouses opened by celebrity chefs and international restaurateurs, THE Steak House is still considered one of the best in Vegas.

The restaurant interior looks like an elegant hunting lodge with red leather seats and dark wood. Steak lovers crave their corn-fed Midwestern beef from the Chicago Stock Yards that is aged 21 days before being cooked to perfection over a mesquite charcoal broiler. THE Steak House also serves lamb and seafood and is definitely worth a visit.

Other dining options include the following:

The AdventureDome at the Circus Circus hotel is a 5-acre theme park with thrill rides, 4-D movies, a carousel, miniature golf course, arcade games, and more. The Midway above the main casino features carnival and arcade games and surrounds the world’s largest permanent circus stage where international circus entertainers perform their breathtaking feats. Free circus acts start at 11 AM daily and can be viewed from the Midway or the Main casino.

The Promenade in the West Tower is a cobblestone walkway with a variety of shops selling apparel, sports memorabilia, gifts, and Las Vegas souvenirs. There are also a few specialty shops located near the Circus Buffet.

Enjoy Your Stay at the Circus Circus Hotel and Casino

The myth about hoards of children running loose at Circus Circus probably originated from the 1971 Bond film, Diamonds Are Forever. In a scene that was filmed at Circus Circus, a Bond girl escapes her pursuers when the bad guys are distracted by a frightened mob of kids fleeing a carnival sideshow. Due to the circus theme, there are usually more kids here than at any other Strip hotel; however, they are not allowed in the casino. The most child-congested areas of Circus Circus are the Adventuredome Theme Park, the Midway, and the Circus Buffet.

With the lowest prices on the Las Vegas Strip, Circus Circus Hotel and Casino is an excellent choice for families traveling on a budget. Rooms on Friday and Saturday nights are always the most expensive; however, rates for Sunday through Thursday are usually only $25-$35 per night for deluxe tower rooms. Kids love the Adventuredome, Midway games, circus acts, and all-you-can-eat buffet. Most importantly, even steak lovers staying at other Las Vegas Strip resorts visit Circus Circus for THE Steak House and its exceptional aged Midwestern beef.